While down on my knees hand weeding the haskap plants in our orchard I was shocked to find blue treasure! Yes, there at the end of the older wood (but still first year growth) was a Lonicera Caerulia berry! I found six of these precious gems on six bushes, or on 2% of the Tundra plants. No berries were found on any Borealis or Berry Smart Blue plants. No berries were found on the year old plants (2nd year growth) that had produced blossoms earlier in the season. So what was it that made those select 2% Tundra plants so special?

These bushes were propagated by tissue culture in the winter of 2011, nurtured in the greenhouse in Canada until mid June, shipped to Minnesota and planted at the end of June. Six weeks later these berries were discovered. Even though the berries look ripe on the outside, the one berry I sampled was quite tart, indicating it lacked a few weeks yet to fully ripen inside.

"Starting with day zero when the flower is fertilized, cell division occurs during days 0 – 23. High respiration occurs during this phase, i.e. plant uses lots of energy to build cells. This may be the most crucial phase for watering haskap. Cell expansion occurs during days 24 – 42, when the cells get filled with water. The berry is green and very firm until day 23. Almost overnight it turns blue on the outside, but needs about three more weeks for the inside to turn dark blue indicating it is fully ripe." (James Dawson, grad student, U of S)

What I've seen of Tundra and Borealis is that they can be expected to grow about a foot a year, up to their adult height of approximately 4 feet. I have seen their growth stunted in highly alkaline soil (>7) and heard that highly acidic soil (<5) is not ideal either. Our foot of topsoil has plenty of organic matter with ph 6.5 and heavy clay underneath. The plants have done very well so far with plentiful rainfall this year.   Bernis, northern MN
Posted by Jim and Bernis Ingvaldson at 10:20 AM No comments: 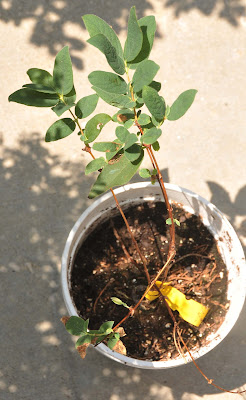 "The leaves on the plants developed brown spots and 7 out of 8 have died. This plant survived after spraying it with an anti fungal spray. I could have done a better job gradually exposing the plants to full sunlight. I planted the berries in Miracle Grow potting soil assuming that they would do well in that kind of soil." Doug, IL (late June planting) 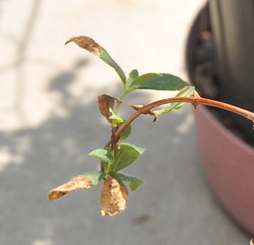 (Editor's notes)
Ideal planting time: late fall or early spring, with dormant plants that can go directly into your pots or ground soil, but we have had very good success with later plantings as well (<2% fatality rate for late June planting). When actively growing plants are shipped, they need adequate hardening off, gradually increasing their exposure to direct sunshine over a 5 day period if the sun is strong.

Brown spots on leaves: The leaves may develop some brown spots during shipping. Our state inspector recommended treatment with a copper fungicide available at local hardware stores, but said it wasn't anything to be overly concerned about. Our experience has shown that the overwhelming majority of plants will survive and produce new growth. Also, in windy areas, the undersides of the leaves may be exposed to the sun scorch (brown streaks) but the leaf does not wither and the plant still survives.

Fertlization: The plants have been given good nutrients in the nursery and do not require additional fertilization the first year, though testing needs to be done to determine what fertilization schedule would be optimal. Aged manure is the tried and trusted fertilizer of choice but we are also looking into other ecologically-based options such as the water soluable 2 step program offered by EarthSoils.  Dry fertilizator spread on top of the soil has burned the bark and killed other growers' plants. Applying water soluable fertilizer in excessive amounts will damage the plants as well. Do not apply fertilizer past mid summer so that the plants do not continue to put out new growth, as they need to prepare their roots for dormancy.

Thank you, Doug, for sharing your experience and fotos. We not only publish success stories but seek to learn from all experiences, so congratulations on being our HoneyberryUSA 2011 Foto Contest Winner! We trust you'll have better success with your replacement plants in the fall!

Bernis, HoneyberryUSA
Posted by Jim and Bernis Ingvaldson at 10:08 AM No comments:

Regret to inform you that the heat and drought have combined to cook your tender little Minnesota berry plants, and they are no more. Dan'l, north central Texas  P.S. I take the blame for not watering them more diligently, and yet was afraid to put them in with the other berries, the grasshoppers have been a mini-plague this year.

Posted by Jim and Bernis Ingvaldson at 8:48 AM No comments:

Email ThisBlogThis!Share to TwitterShare to FacebookShare to Pinterest
Newer Posts Older Posts Home
Subscribe to: Posts (Atom)
This blog has been created to track haskap (honeyberry) plants across the USA and compare how they grow in different climate zones. We would be happy to post any comments and pictures sent to us at info@honeyberryusa.com.
Please feel free to update your location on the Google Haskap map by clicking on the map's Add Marker icon.