Finally, the big day arrived when the Tundra were ripe enough to compare to the Blue Belle honeyberries! First of all, the size was amazing - so much larger than the Blue Belle! We see that the smaller Tundra berries were about the same length as the largest Blue Belle berries, but a bit plumper. The largest Tundra berries were way bigger. The waxy coating is visible on the fotos. And the taste? Blue Belle - sweet-tart with a hint of "wildness", as in something you would expect to pick out in the wild versus a domesticated berry. The Tundra was very pleasant. I didn't find it tart at all. I thought it resembled a domesticated blueberry flavor more than the Blue Belle. It is indeed a sturdy berry that appears to hold its shape well. The skin was thicker than Blue Belle's, but still melted in the mouth. With only a dozen or so berries on this two year old nursery grown plant, this is strictly a fresh eating sampling. I was expecting more tartness and am eager to try some Borealis berries in Canada next month to see which I like better. My evaluation so far of Tundra is that it has measured up to the claims of it being a great berry for its size, flavor, and sturdiness. In regards to the other edible blue honeysuckle berries that I have tasted I would have to say that I like the other ones as well, but given the tremendous difference in size there is no question as to the value of the Tundra.

Jason, from Ohio, emailed how he prefers the sweetness of the Tundra compared to other honeyberries he has tasted, but also that berries taste sweeter after a rain. After last night's soaker, I can verify that fact.  Bernis, Northern Minnesota
Posted by Jim and Bernis Ingvaldson at 7:52 AM No comments:

These berries are both 5/8" long, but the Tundra is twice the width! Both berries are from greenhouse grown plants in their 3rd year of growth. The Blue Belle tastes good to me, and of course we'll have to wait awhile for the Tundra to ripen up! These came from different greenhouses so this is not a good comparison for the ripening rate. There are 2-3 dozen berries on these plants.


﻿
﻿Looking back on this blog, I see that a month ago Blue Belle was in full bloom, so that gives an idea how long it takes for those berries to form and ripen.

Bernis, Bagley, MN
Posted by Jim and Bernis Ingvaldson at 1:56 PM No comments:

I planted 24 Borealis, 24 Tundra and 6 Berry Smart Blue the week of April 23, 2011.
These were year old plants from HoneyberryUSA. I dug a hole for each, 20" diameter and about 16-18" deep.  Prepared the soil with a small amount of certified weed-free compost, humate, some straw, and a half gallon of potting soil.  Then placed the soil mix back into the hole and placed the haskap in the center with the top of the root ball 6" below ground level.  I then filled in covering the base stem with 1-2" of soil mix leaving the plant in a 4" deep bowl and also built up a small mound around the 20" hole with the remaining soil.  This looks to be great for times of rain or watering, plus it offers some protection from future wind.  Overall, the shipment looked well packed and arrived in good moist condition with small green buds showing that they were just coming out of dormancy. I do have 3 Borealis and 3 Tundra that do not have buds and the stems are not showing the alive buckskin brownish stems. These 6 have very slender stems that are a dark brown and all are the smallest of the shipment.  I will continue to give great care to these 6 and look for signs of life. April 25, 2011
Later: I have one Borealis that is showing no signs of life, all the rest
recovered and look great.  I have 2 Tundra that are flowering." June 7, 2011
J, north of Idaho Falls, ID
Posted by Jim and Bernis Ingvaldson at 2:33 PM No comments: 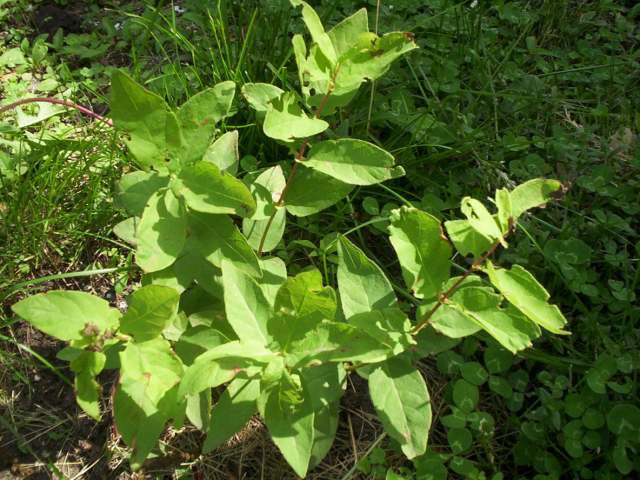 This Tundrealis (can't remember if it was Borealis or Tundra) survived record breaking 100F heat this week with afternoon sun, but something must have nibbled its leaves earlier in the spring. Some holes in middle of leaves, and a bit small for rabbit bites, so maybe an insect? The Berry Blue 10 feet away was not touched. No blossoms appeared on these year old bushes planted last fall. About 10" of growth so far this year. Bernis from Albert Lea, MN
Posted by Jim and Bernis Ingvaldson at 2:20 PM No comments:

Email ThisBlogThis!Share to TwitterShare to FacebookShare to Pinterest
Labels: Honeyberry Minnesota
Newer Posts Older Posts Home
Subscribe to: Posts (Atom)
This blog has been created to track haskap (honeyberry) plants across the USA and compare how they grow in different climate zones. We would be happy to post any comments and pictures sent to us at info@honeyberryusa.com.
Please feel free to update your location on the Google Haskap map by clicking on the map's Add Marker icon.